Graduate Student James Pappas was invited to the Air Command and Staff College (ACSC) located at Maxwell Air Force Base in Montgomery, Ala., to conduct archival research on the roots of the U.S. Air Force’s Air Corps Tactical School (ACTS).

James’s work explores the influence international treaties such as the Hague and Geneva conventions had on the U.S. Army Air Force commanders and war leaders who drafted and executed strategic bombing policy and practices over Europe and Asia. 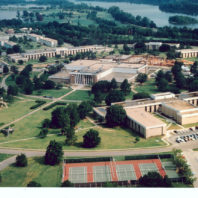 Originally founded in 1920, the mission of the Air Command and Staff College is to develop airpower leaders who think, communicate, and collaborate in the joint environment to strengthen national security. ACSC houses the Air Force Historical Research Agency and is home to the world’s foremost airpower, Strategic Air Command, and strategy scholars.

James will be traveling to ACSC in summer 2016.

Read more about the Air Command and Staff College.