History was made in the office of the WSU student body president this past academic year—literally.

History major Jordan Frost completed his term as ASWSU president in May 2018, finalizing a journey that began in the fall of 2013. President Frost’s academic story is one that could rival the best Horatio Alger yarns. 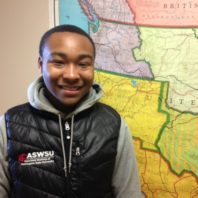 Jordan admits his academic journey got off to a “shaky” start, but five years later, he now finds himself in possession of a WSU diploma with a degree in history. And just because Jordan completed his undergraduate degree, it doesn’t mean his academic career is over. Beginning this month, he will continue his education toward a master’s degree in teaching social studies. His goal: to return home and teach history and/or social studies at his high school alma mater, Kent-Meridian in Kent, Washington.

“I know his will sound corny,” he said, “but I want to give back to the community, and being a teacher is one of the best ways to achieve this. I have met and worked with so many wonderful people as president; I know how important developing people skills and academics really are.”

The skills Jordan learned and developed as a WSU history major served him well while he was president.

“Critical thinking,” Jordan said, was among the top learned “history skills” he employed as president. “Being able to know which information is valuable is really key. Just like in history, being able to evaluate a source is really important.

“Critical thinking taught me that, when looking at an issue, no one’s evil or good. People just have different positions. For me, looking at evidence, looking at primary sources—all kinds of documents and data—helps me to determine what is the best approach on a topic.”

Jordan’s history-major approach to being president also added to a bit of clutter in his desk. “We had all sorts of reports on shelves, going back years and years,” he said. “Many of my predecessors looked at it as ‘old stuff’ and they didn’t take much value from it. But I knew how to evaluate it. I took the reports down and put them in the drawer of my desk where I could consult them. It was just like doing a history report, like in History 300 or History 469.

“Preparation on a topic leads to greater depth and understanding. Believe me, when I go into a meeting, nobody can up me on the facts. Sometimes an administrator might say, ‘No, we can’t do that, we’ve never done that,’ and I’ll respond, ‘Uh, no, we can do that’ because I have the data to show what’s been tried before. If understanding history has taught me nothing else, it has taught me to be more deliberate.”

It’s not unusual for WSU students to bring back souvenirs from summer travels abroad, but junior Jacee Thompson may have taken the “bring-back-a souvenir” concept to another level. 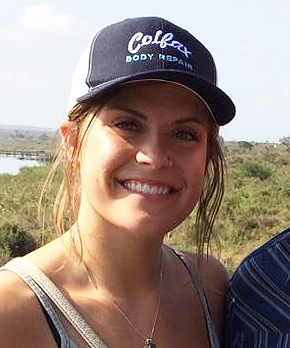 When the chance arose last summer to travel with family members to Africa, it was an opportunity too good to pass up. A history major, Thompson, 21, knew traveling abroad would expand her knowledge of the world and help strengthen her foundation for success in the classroom.

While in South Africa, Thompson learned about the South African Boer War, “which was the major disassociation from the British Empire,” she said. “They mostly spoke of the brutality of the war and the organized concentration camps with the attacks on many of the farms.”

Today, the subject of poaching is the major topic of discussion, she said. “The poaching of all animals is taken very seriously—most of all rhinos, for the value of their horns.”

Culturally, Thompson enjoyed how the people of South Africa are “super close.“

“They are big into having people over for social gatherings,” she said. “They have a thing over there called ‘braiing’ [Afrikaans for “roasted meat”]. It’s kind of like a big barbeque, and people gather and sit around an open fire. It’s really fun. It’s kind of like a large family.”

“It seems we were traveling all the time,” she said. “I never got to Cape Town, but Kruger Park was really cool. Being ‘head on’ with an elephant is really fun. The giraffes were so amazing.”

While on the continent, Thompson also joined her uncle Brett Thompson on safari. The result: Thompson bagged herself a kudu—a curly-horned African antelope. “It’ll cost something like $1,000 to stuff it and ship back here,” the Colfax, Washington, native said. “I’m not exactly sure where I’m going to hang it in my house.” 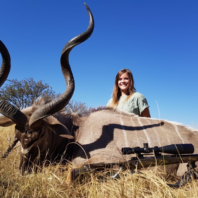 Thompson, who by her own admission is a “pretty good shot,” has hunted deer locally near Kamiak Butte for years.

“The hunting was really fun,” she said, “but I’ve never been around a country where so many people didn’t speak English as their first language. The people there are very accommodating to you. I mean, when they see you, they hug you, offer you something to drink, carry your bags.”

In all, Thompson came to appreciate the educational experience her South African trip provided. “It gave me more of an appreciation for my coursework, that’s for sure,” she said. “You can learn so much. It’s interesting to hear about other people’s historical backgrounds.”