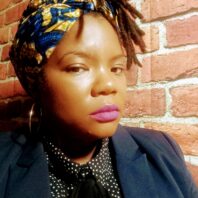 She is also the architect of “Islands in the North,” an ongoing, interactive, curated digital exhibit (re) creating Black cultural and spatial identities in Toronto. She continues to engage in digital histories and humanities as a way to explore other dimensions of historical scholarship and public engagement.

She is currently working on her book manuscript, which is a comparative transnational study of Jamaicans in Toronto and New York City during the twentieth century. Dr. Gaynair uses “infrapolitics” to examine the social, cultural, and political building of community institutions in both major cities, and how Jamaicans in the diaspora challenged what it meant to be “Black”, “American”, and “Canadian” on a global scale.

“A Riot Is The Language Of The Unheard: Centering Black Caribbean Voices in Crown Heights.” (Under Review)

“She Wiggled Her Body In The Most Suggestive And Obscene Manner Sexuality And Respectability In The West Indian Labor Day Parade.” Gotham: A Blog for Scholars of New York City History, April 27, 2021.

“Black Women Were Vital to the UK’s Black Power Movement Even Though Guerrilla Doesn’t Show It.” EBONY Magazine, April 12, 2017.