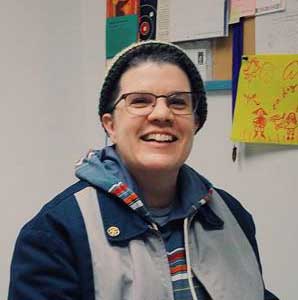 My work focuses on Chicanx and Latinx histories (especially queer Chicanx histories) as well as borderlands histories – with borderlands understood as sites of conflict. My first monograph, ‘”This Land was Mexican Once: Histories of Resistance from Northern California,” was an attempt to understand how white supremacy came to dominate my hometown, and to excavate the multiple histories that preceded the arrival of Euro-American settlers.  In 2012 Antonia Castañeda allowed me to edit and compile a number of her essays into a cohesive volume for North Texas Press.  Luz María Gordillo, another historian with our unit conducted interviews for the volume and eventually produced a documentary on the life of this powerful founder of our field.  The result of our efforts was Three Decades of EnGendering History: Selected Works of Antonia Castañeda (2014).

Not to dwell exclusively on publications, but my second monograph allowed me to explore trans-ing history. Applying the Mexican/Anzaldúan concept of nepantla to our continent, I mapped relationships between the movement of capital, culture, and people – especially, but not exclusively transgender Latin@s–in the late nineteenth and late-twentieth centuries.  That work, Nepantla2, was a finalist for a Lambda Literary Award in 2021.

Today, I am working on a project that excavates, maps, and analyzes sex, gender, faith and power in the history of the United Farm Worker movement.  I was first attracted to this topic when I had the opportunity to explore the relationship of faith and queerness in the speeches of Dolores Huerta.  It is intersections such as these that I enjoy bringing into the classroom, where, with the students of WSU, I explore connections between sex, gender, capital, and race in constructing a useable past.

As our nation continues to grow and diversify it is an exciting time to work in the field of history. Washington State University has provided me with a space where I can thrive and move between the multiple communities that make me who I am and make my work possible.

“This Land Was Mexican Once”: Histories of Resistance from Northern California. University of Texas Press, 2007.

A Sampling of Chapters and Articles:

“Transgender Women, Sexual Violence and the Rule of Law: An Argument in Favor of Restorative and Transformative Justice,” in Razor Wire Women eds. Jodie Lawson and Ashley Lucas. SUNY, 2011.