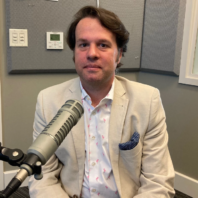 Dr. Hatter is a transnational historian of early America in the eighteenth and early-nineteenth centuries. He regularly teaches a range of classes, including the American History survey to 1877, Early America to 1750, the Era of the American Revolution, and the U.S. Graduate field course.

Dr. Hatter is an historian of American Empire. His first book, Citizens of Convenience: The Imperial Origins of American Nationhood on the U.S.-Canadian Border (Charlottesville & London, 2017) won the 2016 Walker Cowan Memorial Prize for an “outstanding work of scholarship in eighteenth-century studies” and was named a 2017 Choice “outstanding academic title” by the American Library Association.

Dr. Hatter is currently beginning research on two new book projects about the global context of American Empire: Selling Independence: American Overseas Merchant Communities in the Age of Revolution and Entangling Alliances: America and the World from George Washington’s Farewell Address to the War on Terror.

Citizens of Convenience: The Imperial Origins of American Nationhood on the U.S.-Canadian Border. Charlottesville & London: University of Virginia Press, 2017.

“Taking Exception to Exceptionalism: Geopolitics and the Founding of an American Empire.” Journal of the Early Republic, 43 (Winter 2014): 653-60.

“The Narcissism of Petty Differences? Thomas Jefferson, John Graves Simcoe and the Reformation of Empire in the early United States and British-Canada.” American Review of Canadian Studies, 42 (June 2012): 130-41.

Listen to Dr. Hatter’s interview with Dr. Joseph Stoltz on George Washington’s Mount Vernon podcast, recorded in spring 2018. If the media player below is not available, please click here.

“Not only does Trump get U.S.-Canada history wrong, but he just might be repeating the worst chapter of it.” The Washington Post, June 14, 2018.