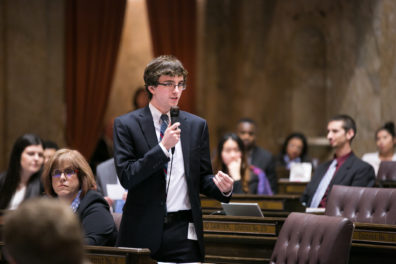 Two WSU history majors Nathan Trivers and Andrew “Reed” Simock made “history” this past spring by serving as state legislative interns in Olympia.

Nathan, a history/economics double major, and Reed, who is a member of the Honors College and double majoring in history/political science, both completed internships during the eight-week 2016 legislative session.

As part of his three-credit internship, Reed agreed to provide the department with a summary (below) of his duties and experiences working with Sen. Andy Billig (D), 3rd District – Spokane.

“The first week of session was by far the slowest, as many of the activities of the session had yet to fully ramp up,” Reed wrote. “However, I was grateful for the initial lull, as it gave me time to learn for which duties I was responsible in the office.

“My core responsibilities included, tracking the progress of several pieces of legislation, managing the Rules Committee ‘pull requests,’ and responding to ‘Hotlines’ (constituent calls into the office.)

“In addition to my standard workload, my office also had me work on several ‘one-off’ projects.The largest of these was writing my senator’s Capital Budget request letter, which required me to compile information from several sources into a letter requesting funds for local organizations. I also drafted several articles for my office’s weekly newsletter, sdc.wastateleg.org/billig/e-newsletter.

“Another great part of the internship was the fact that I was able to sit in on meetings with Senator Billig. These meetings ranged from talking with groups of constituents, to sitting in on a conversation between the Senator and lobbyists. I enjoyed sitting in on the lobbyist meetings because they provided a fascinating look into how stakeholders work with legislators to shape and pass bills. Perhaps the most interesting meeting that I sat in on was a policy formation/strategy meeting to determine the legislative direction of a bill between several senators and representatives.

“During the second month of the internship, things in the office began to settle into a routine. Each person (the Legislative Assistant, the Session Aide, and myself) had roles and responsibilities, and would help one another out if needed. I was responsible for responding to certain types of constituent calls, and any research projects my office required.

“I was also responsible for organizing the ‘rules pulls’ requests for the senator. The Rules Committee is basically the last committee that all bills have to go through after passing out of a more specialize committee (e.g., Transportation). The Rules Committee meets periodically during the session, and each member gets to pick a bill or two to be ‘pulled’ from the committee and put onto the floor for debate. As this is an important step for bills to pass through, other members, lobbyists, and constituents all write to the members of the Rules Committee asking their bill be pulled, and it was my task to organize these requests into a manageable form.

“Perhaps my favorite task was helping to write the senator’s newsletter. Every week or two, my office sent out a newsletter to constituents providing an update on what was happening in Olympia. I would write the first drafts of these, before passing it over to our communications director.  It was fascinating to see the different drafts and revisions of the newsletter before it was sent to the public, and it was always neat to see a section that I wrote remain relatively intact in the final draft.

“In February, we also held our Mock Legislature.  This is an intern activity designed to help understand and appreciate the dynamics of the legislature firsthand. The Mock Legislature was split into two phases, the Mock Committee hearings and the Mock Floor Debate.

“During the committee phase, the interns got to choose their role (committee member, committee staff, lobbyist, or prime sponsor) and sit in on one of four committees that was hearing a mock version of a real bill previously introduced to the legislature this year.

“The Mock Committees convened to hear the bills, listen to testimony provided by other interns, add any amendments, and ultimately recommend whether or not the bill should be heard during the floor debate.

“During the Mock Floor Debate, interns were allowed to choose to which caucus they wanted to be a part (Republican or Democrat), with the Democrats having a slight majority to reflect the real-life dynamics of the House of Representatives.

“The caucuses then worked together to either pass or defeat the bills that had made it out of committee.

“Though most of the interns were relatively moderate, and in real-life did not have a preference regarding policy positions, it was interesting to note how quickly the mood descended into partisanship.

“While there was not much difference between the Republican and Democrat positions, on some bills, a ‘tribe mentality’ quickly came to the fore. People began to focus not on creating the best policy but, rather, on creating a victory for their caucus and a defeat for the other side. The Mock Legislature showed how quickly and easily it was to turn politics from a consensus building endeavor into an adversarial showdown.

“With the approach of the end of session in March, work around the office slowed a bit. As the number of bills still left alive for the session shrank, fewer people called in to give input on an issue.  Instead, much of the action was on the floor of the legislature. The result was that with the approach of the last couple of weeks of the regular session, the attention in the office shifted from a mad scramble to stay on top of all of the meetings and constituent responses to prepping for the interim session. The first weeks of March also provided a great opportunity for the office to reflect on the session. We were able to look back and identify what worked well, and in what ways we could improve our future efficiency and delegation of tasks.

“Looking back, this internship was a phenomenal opportunity for me. It was fascinating to watch how our state government worked up close and personal. It is one thing to read about the legislative process in a textbook, but it is another thing entirely to have a first-hand look at the sometimes messy process of legislating. Furthermore, the internship provided me the chance to get a jump on developing and honing my professional skills, and also got me thinking about the future. After working in a legislative session, I now know better how government operates, specifically legislatures, and a career in government is something  that I want to pursue. This internship has given me the skills and abilities that are required to make my future political goals a reality.”