Co-sponsor with the School of Languages, Cultures, and Race: 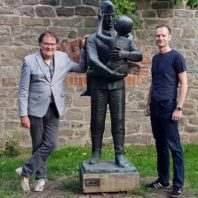 Since the fall of the Berlin Wall in 1989 and the reunification of Germany that followed a year later, life in the former German Democratic Republic (East Germany) has undergone considerable upheaval. Economic integration with the former West Germany, environmental clean-up, and the alteration of historical memory are but a few of the many changes there. Some of these have also led to considerable social discontent across the provinces of the former East Germany. Such discontent has recently coalesced into the new populist, far-right political party “Alternative for Germany” (AFD), founded in 2013. Currently the third largest political party in Germany, the AFD holds 94 seats in the German national parliament. Students interested in opportunities to study abroad in Germany are especially encouraged to attend as Dr. Fuchs will also discuss study abroad opportunities at Otto-von-Guericke Universität Magdeburg and the Hochschule Magdeburg/ Stendal, both in the city of Magdeburg, which was once part of the former East Germany and dates to the year 805 A.D.

Dr. Thomas Fuchs teaches English at the Hochschule Magdeburg/Stendal and is an alumnus of the German Academic Exchange Service (D.A.A.D.). His colleague, Christian Kulosa, is a member of the General German Cyclist Club that promotes green-transportation and environmental causes across German.